During this step, information managers map the process that each land goes through as it is cleared or its impact is otherwise reduced. Using a combination of the relevant land types, status values and relationships, information managers design an information workflow that will be implemented as standard operating procedures (SOPs) for data entry and analysis. Some Mine Action programmes may have only one process for all categories of land while other Mine Action programmes may have three or more processes.

The first element of mapping the activity workflow is to build a map of the relationship between the objects and processes involved in the activity. Starting with the first representation of the land, the workflow map should describe the processes done to the land and the output of the process. The workflow map should trace the entire process from land identification through clearance and release of the land according to the operational process in use in the programme. In the example below, a Suspected Hazardous Area (SHA) is linked to a technical survey that was conducted on the land. The survey resulted in a Confirmed Hazardous Area (CHA) on which a clearance was done, and the clearance resulted in a cleared land. Finally, a completion survey was logged to close the land. 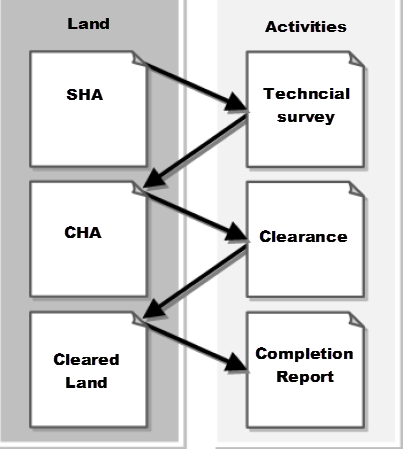 This workflow map identifies the activity that is used within the Mine Action programme and can be mapped in IMSMANG to track the clearance of land. Because IMSMANG supports customisable workflows, it can be used to track different workflows for different objects. For example, a Mine Action programme may have a separate abbreviated workflow for spot EOD tasks that involve only the identification of the UXO Land (object) and a clearance of the land (process) without additional surveys or steps. This process should also be mapped for implementing in IMSMANG.

Along with a workflow map that describes the relationship between the various types of objects and processes in a workflow, the status changes or outputs from the process are critical in adequately mapping the land clearance process. IMSMANG uses the status value of items to track where the object or process is in its workflow. Objects and processes in IMSMANG can have different status values. For example, land can be defined as Open, Worked On, or Closed, while activities that are more process-oriented can be Planned, Issued, Ongoing, Completed, Suspended, or Aborted. Defining a set of status values for each item provides the capability to:

The following figures show how each Mine Action programme can tailor the system to support a specific land clearance/activity workflow process for each type of land, from a traditional process for minefield clearance with multiple steps including a technical survey and completion survey to a simplified process for UXO clearance that includes only one EOD Spot task report. Each example involves a single Land on which one or more activities are conducted. At each step, information about the land's status and type is updated as a result of the activity.

In the figure below, a SHA is created and its status is set to Open. A technical survey process is then conducted on the land, which results in changing the subcategory of the land from SHA to CHA and defining the land's perimeter. Next, a clearance process is conducted on the CHA that results in updating the status of the land to Worked On. Finally, a completion report is submitted that updates the status of the land to Closed. 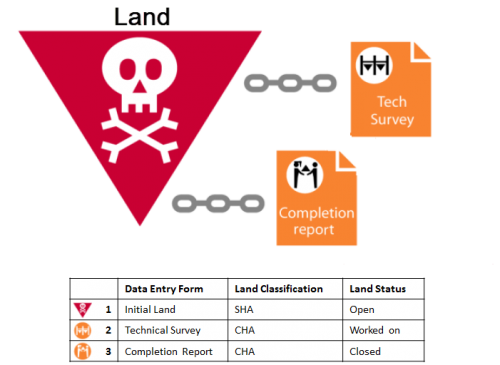 Example of a Traditional Workflow

Simpler processes can be defined for other types of land. For example, an EOD spot task would likely not go through this complete workflow and instead start with a subcategory of EOD and a status of Open. A EOD Spot task could then be conducted and the EOD status updated to Closed, without requiring a completion survey. 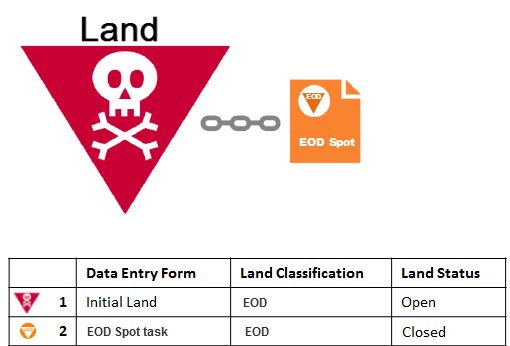 Example of a Spot EOD Workflow

By documenting the entire process conducted on each type of land, including the changes in status and type that result from activities, information managers create a complete map of the land/activity workflow that informs how linking and reconciliation decisions should be made and provide a guide to data entry personnel.

Once the land/activity relationships and workflow are defined and documented for each type of land, the next step is to define how progress data for the land clearance processes is collected. Incremental progress data is collected for a reporting period, usually, the number of mines/ERW cleared, area cleared and hours worked for tasks that take long time to complete. In IMSMANG, each progress report is stored as a new activity. This may be done in different ways:

Information managers should assess which approach better meets the needs of their programs when selecting an approach to tracking progress. 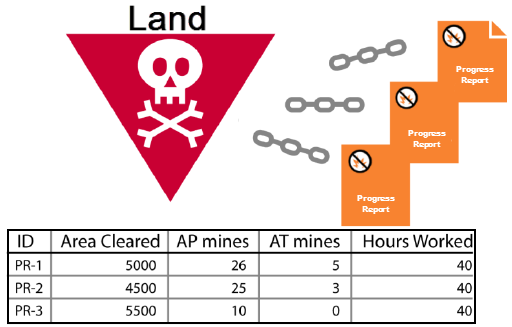 Progress Reports linked to the Land

The Progress Reports are linked to the Land. As a result, individual progress reports can be queried to determine how much progress was made during a given reporting period. In addition, aggregate progress information can be queried easily for each Land (for example, the total mines that have been reported cleared). This method requires to create a Land record and that the Land report is entered and approved in IMSMANG before the first Progress report is entered into the database. This method has the Land in focus and is getting more common. This is the method that we recommend to first evaluate.

An third approach to store progress information is to reconcile the Progress Reports as updates to the clearance using the combine option during reconciliation. Using this method, the different progress reports are not visible as individual Progress reports in IMSMANG; their information is combined with, and added to, the clearance information collected to that point. It will, however, become more complicated to determine progress during individual reporting periods, for operators to see their Progress Reports and to ensure high data quality. We do not recommend this method.