The IMSMA.mxd contains the symbology which will be used in the Map pane for the Mine action data. You need to use ArcGIS software to update IMSMA.mxd which is located in C:\IMSMAng\server\gis\maps folder. 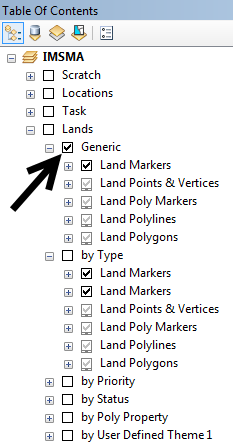 When a layer is activated in the Map pane then the Generic symbology will be used because that is the default/activated in IMSMA.mxd.
In this example the scale is greater than 50,000 and therefore the symbology defined in Marker symbols will be used.

In this example the scale is between 1:25,000 and 1:50,000 and therefore the symbology defined in Polylines or Polygons will be used if the item is a polyline/polygon.
The Poly Markers will also be used and placed at the centroid of the polyline/polygon.

In this example the scale is between is less than 1:25,000 and therefore the symbology defined in Points & Vertices is also shown.

This example shows how to get Marker symbols and polylines/polygons (Poly Property) to look different based on data/properties of the items.